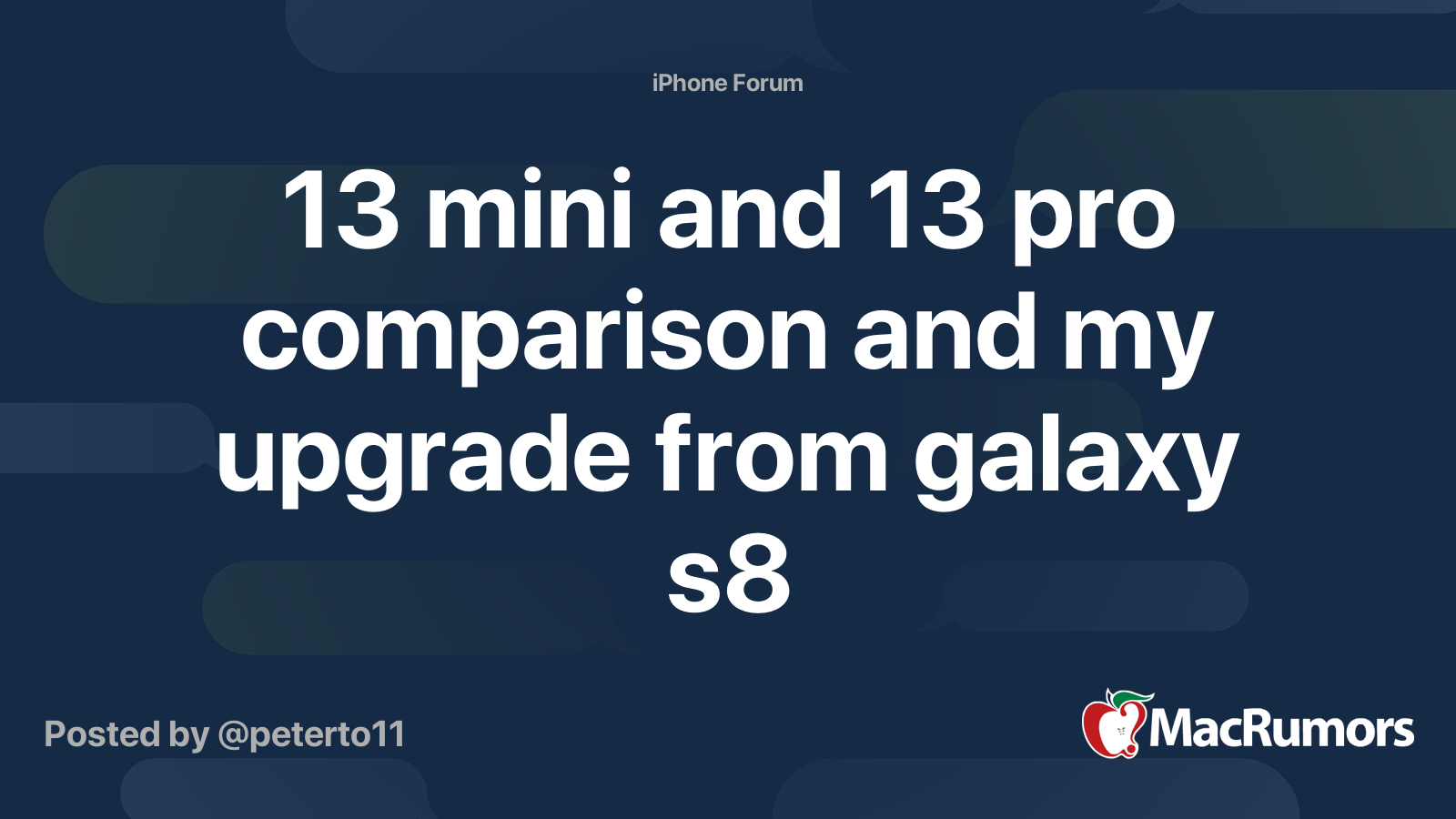 Hey guys, so i just recently upgraded from a samsung galaxy s8 to an iphone 13 pro and then returned it and got the iphone 13 mini. Here is my story and comparison to help out people in a similar situation.13 for

The iphone is a bit shorter and thinner than my samsung s8 but it is wider. I tried the 13 pro at a store and it felt bigger but manageable. I thought no big deal. I can use my s8 with one hand, the Iphone isn’t going to be a problem. But I immediately found out I couldn’t do anything with one hand. I can’t use it while carrying a bag , or locking a door, or at the gym. Because of the added weight, the square design, ios putting control center and the “done” button in the top right corner, this phone felt so much bigger than my s8. I could barely manage without a case. With the apple leather case it became unusable to me. I can barely type on the keyboard with one hand. It fits much worse in my pockets. I read that others upgrading thought the same but got used to it in about 2-7 days. I tried reachability, but it isn’t a comfortable gesture to do many times. I added an assistive touch button which helped. I used the one handed keyboard. I used shortcuts and siri to automate tasks. I tried back tap to pull down control center but it didn’t work well when the phone is in a case. It weighed 42% more with the case than my old s8. I can hold it for a long time but it is uncomfortable and your fingers get tired. I was just thinking whether to return it or not.
When using the 13 pro at home or at the office, with two hands its an amazing phone. Big screen, the speakers are amazing. But i’d rather use my laptop at those places. I returned it.

So I decided I would get a 13 mini, the only small option on the market.

The phone is indeed a bit smaller than the iPhone 7, 8, se3 but it doesn’t feel like a mini phone or toy phone. It feels slightly less than normal sized without a case. With a case it’s a normal sized phone. Keep in mind apple cases are a bit thick. The apple clear case with Magsafe is 25 grams, and the phone weighs 166 grams / 5.8 ounces with it. With a glass screen protector and an apple case it weighs more than a regular iPhone 13. If you want to keep it light, buy a soft clear silicon case without Magsafe they weigh about 10-11 grams and protect well. The screen is only 11.4 percent smaller than the 13/13 pro.

The build quality on the 13 PRO is the best there is on any phone. It’s amazing. It’s so ****ing sexy. The 13 mini is very good, but the Aluminum side and the glossy glass on the back is a step down. Of course it is lighter which is good.

The screen is amazing. I don’t miss the bigger screen at all. The colors and viewing angles are the same as the 13 pro, the brightness is a bit less, but it doesn’t seem like 20% or 1/5th less like the specifications of the phones state. 800 nits for 13 mini and 1000 for 13 pro on apple’s website.

The battery life on the 13 mini is moderately worse than the 13 pro with promotion on. In web browsing you get 35% more battery on the 13 pro and in YouTube streaming about 25-30% more battery. In mixed usage reddit, YouTube, calls you get about 35% more screen on time on the 13 pro. At the end of the day with the 13 pro I am at about 10-20%. It can get about 7 hours screen on time on a full charge. With the 13 mini I usually need to top up 10-20% to get by the day. I get about 5 hours screen on time with a full charge on the mini. I only use YouTube, Apple Music, Reddit, a little photos, and phone calling. Not gaming. Using the camera kills the battery fast! If you turn off promotion on the iPhone 13 pro, battery life in web browsing is an amazing 50 % more than the mini. In YouTube about 35 % more battery. In mixed usage about 40% more screen on time. About 7.30- 8 hours.

They are amazing for the phone size. I am very impressed. A big upgrade from my old s8. They are about as loud as an m1 MacBook Pro when both are on max volume but less mids and bass.The 13 pro sounds louder and has more bass. It is noticeably better.

Because the phone is easier to handle one handed back tap works better on the 13 mini because it’s easier to grip it and tap.

Amazing phone. Get it while you can! If you have an iphone xs , 11 pro it’s definitely an upgrade from those devices in most areas. If you have a new xs the battery is about 15% worse but if it’s 2-3 years old it’s much worse. It is a but a moderate step down in battery and moderate step down in camera from the 13 pro but the 13 pro has awful usability. It makes me want to buy both.

I’m so sad this phone doesn’t sell well and is getting discontinued. In a few years when the lightning port and sim tray are removed therefore more space is freed up inside the phone, it would have an amazing battery life, but sadly that is an unlikely future.